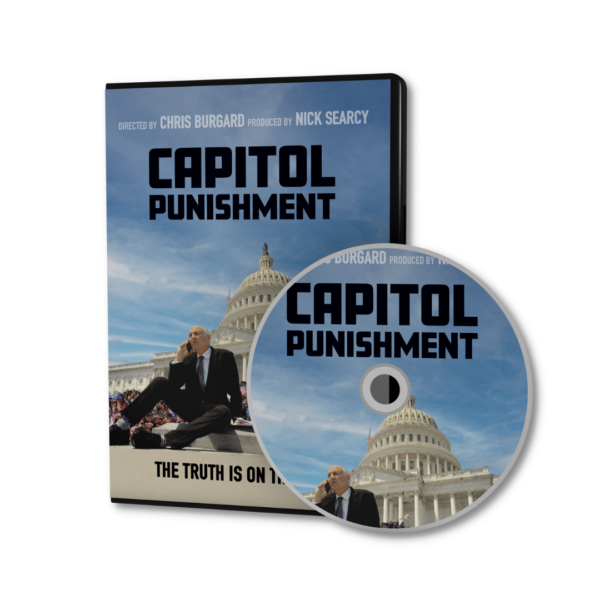 Everything they told you was a lie. This is the TRUE story about January 6th, 2021.

WARNING: This DVD has been banned, but we have been working behind the scenes to get it to you. The DVDs are being pressed now and will be in stock by mid December. If you want to get in on this next round of production, please secure your copy by pre-ordering now. This inventory will not last long. Also, we are not sure how long we will be allowed to sell this film. In fact, we’ve had to alter the spelling of the film title and the infamous date slightly to hide from enemies of the truth.

Told through the eyes of the people who were there on the ground, CAPIT0L PUNISHMENT shows the world the TRUE story of January S!xth, 2021.Everything that we are being told is a lie and Americans are being persecuted to support that lie.

January 6th was years in the making and the threat to the survival of America as we know it, has never been greater.

Actor Nick Searcy was at the January 6th rally and provides never before seen footage of the January 6th rally. Searcy interviews those who were arrested in SWAT-style dawn FBI raids for being at the event. The documentary also featured recordings of Ashli Babbitt at the rally minutes before she was killed by Capitol police as she broke into the area where members of Congress were sheltering from the protesters, and interviews with her husband after her death, as well as interviews with rally goers who were held in solitary confinement without bail or a trial for several months, and are now awaiting trial, in most cases having rejected plea deals, in early 2022.

Searcy provides footage showing the size of the crowd, showing Capitol Hill police removing barricades and inviting rally goers into the Capitol, and footage of people who led the crowd into the Capitol changing gear behind trees and bushes. The role of FBI informants is discussed by former and current FBI and DEA agents. Searcy also interviews former military and FBI officials who contend the ‘insurrection’ at the Capitol was orchestrated by people within the government in order to create a useful political narrative. However, no evidence is provided to substantiate these charges.

NOTE: If you want to get in on this next round of production, please secure your copy by pre-ordering now.